SASC provides a special program to provide additional support for our U6 and U8 coaches.

Coaches of U7 teams can also participate if desired, but the number of slots is limited and priority will be given for the U6/U8 teams. Please contact the SASC Recreational Director if interested.

The SASC Director of Coaching (DOC), Andrew Ransome, will post practice plans here each week during the season for teams to reference before each practice session. Sometime we are able to provide a short video demonstrating one activity of the day's practice. 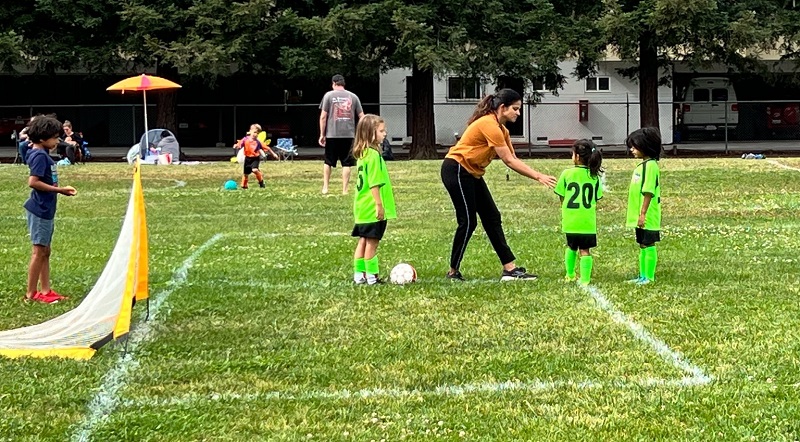 The parent coach will have the following responsibilities:

Parent Referee (U6 only)

Each U6 team is required to have (at least) one parent volunteer as team referee. Note that this parent must be someone different from the team coach. The parent referee will have the following responsibilities:

Each U6 & U8 team will be assigned a club practice session on either Wednesday or Friday afternoon at a city field. However, each team's coach will decide if they will participate in these sessions, or run their own practice at a time/day/location of their preference.

For the club sessions, the assigned day of the week will be the same for the entire season.
Coaches will have a limited ability to request either the Wednesday or Friday time slot on a first-come basis.

The practice field will be split into a number of smaller areas by cones. Each team will use one of these areas.

First practice will be either Wednesday, 8/31 or Friday 9/2.

Each week, a practice plan with age-appropriate activities will be provided to the coaches by SASC Director of Coaching (DOC), Andrew Ransome. The team coach will run their session according to the practice plan. Coach Andrew will explain and demonstrate each activity, and provide support as needed.

Note that each team's coach will always be directly supervising the players on their own team (i.e. they must always be present).

Coaches are free to organize their own practice session at another time and location. This would be completely optional and could be in addition to the SASC session - or instead of. Check with the SASC Recreational Director for City of Sunnyvale fields where we have permits.

Each Saturday, teams will play their games at a city park within Sunnyvale.

At each park there will be multiple fields laid out on the grass, and teams will receive a schedule shortly before the season starts via our communication / scheduling tool (BYGA). This will provide the exact field and time for each week's game.

On each game day, the coach is responsible for the following: Overall - just let the kids play the game and have fun!

Note that the volunteer coaches will have an opportunity to provide the league any Saturday scheduling constraints they have before the schedule is published. In particular, if a coach also coaches another SASC team in a different age group, we will make sure the games do not overlap. Other 'noble' scheduling requests will be honored as best as possible (e.g. work commitments). However, this is provided only to the coaches, and only in order to maximize their ability to attend each game. It is not meant to allow convenience scheduling for individual players/parents.